100 years of the Aberdeen Philatelic Society

Jeffrey Stone writes as follows on the history of the Society....

Meeting Places
On the 30th March 1910, nine philatelists assembled in a solicitor's office in Union Street, Aberdeen, and formally approved a motion "that it is of the opinion of this meeting that it is desirable to form a Society to promote the collection and study of postage stamps". Thus, a fourth philatelic society came into being in Scotland. In the early years, the Society met in several different venues until in 1928, the Society leased and furnished its own rooms in the city centre. Within a decade, however, it had outgrown its leased premises and once again hired rooms on a nightly basis, often in venues whose institutional names are unfamiliar today, such as the Loyal Order of Ancient Shepherds and the Caledonian Order of United Oddfellows. In recent years, a modem Church Centre has provided the Society with comfortable, well lit premises with provision for refreshments, and storage space for frames and a substantial library. That same venue is used, not only for the programme of evening meetings, but also for regular morning meetings when members meet for coffee and conversation, much of it philatelic. Return

Education
Looking back over a century of meetings, trends are apparent. An educational function loomed large in the very early years. Topics rather than individual stamp-issuing countries were chosen, with evenings devoted to watermarks, stamp design and how to arrange a stamp collection. By the late 1920s, a shift in the balance of the annual programme is evident, with an increasing proportion of meetings devoted to displays of the stamps of named countries. Looking back over the entire span of time, no less than 130 different stamp-issuing countries are named. Aberdeen's location may be a factor in the frequency of local talent rather than visiting speakers, with members' nights usually scheduled more than once in a season. Distance has not prevented visits, nevertheless, with speakers from far and wide including Fred Melville and Robson Lowe, who was a frequent visitor to Aberdeen. Return

Conduct
The minutes of the Society show that the conduct of meetings in the past was much more formal than today. Speakers delivered "papers", generating discussions which were conducted from the Chair and carefully minuted. Up until the late 1950s, displays of stamps were passed round by hand or occasionally placed on trestle tables. The acquisition of display racks constructed by two members in 1959 was not to everyone's liking and they did not come into regular use until the late 1970s. Circulating sheets by hand, albeit in protectors, must have been a frustrating process for those on the end of the line during the late 1940s when attendances at meetings were in excess of one hundred.  Return

Membership
Membership numbers have fluctuated considerably over the years. Membership rose through the 1920s to about 140, holding at that level or slightly above, before taking off after the second world war to the highest ever number of 310 in 1951. Thereafter, a slow decline occurred with numbers now stable around sixty-five.  Return

Exhibitions
The Society has a long history of organising public exhibitions in Aberdeen, particularly in the early years, to stimulate interest in philately and to recruit members. In the 1920s, several one-day or evening exhibitions were arranged in a city centre venue. Press reports speak of hundreds of collectors and others paying for admission. Later exhibitions have usually been arranged on anniversaries, such as the Society's Golden and Diamond Jubilees. In 2010, the Society staged a rolling exhibition with a maritime theme, over four months, in Aberdeen's Maritime Museum. Return

Library
In 1910, the Society acquired by donation the nucleus of a library and the maintenance of a library was identified as an important function of the Society from that early date, although its fortunes have fluctuated. In 1937, the increasing problem of storage resulted in the library being offered to Aberdeen Public Library. The City Librarian readily accepted the collection of 307 volumes, an interesting indication of the status of the hobby. By the 1960s, some significant donations had given rise perforce to the nucleus of a new library, until a chance visit in 1999 to the public library by the then President led to negotiations for the retrieval of the collection and the consequent amalgamation of two collections into a single library containing classic early works and some of the most recent reference publications. Likewise the Society has a forgery collection initiated in 1912, as a virtuous activity which any responsible philatelic society should undertake. Members who found themselves in possession of forgeries were expected to donate them to the Society collection and many members did so in the early years and through the 1930s. By 1956 the collection contained some 1400 items. Return

Exchange Packet and Auctions
An exchange packet was also an activity initiated at a very early date and it was one activity which continued to do very well throughout the First World War when meetings were few in number. Its growth was rapid and it was an important activity for many decades. Collectors living at a distance from Aberdeen joined the Society specifically to receive the packet. It was carefully regulated from the outset though the Packet Secretary frequently complained of breaches of the rules at the AGM. The packet remained a successful feature for many years but began to decline in popularity in the 1950s. It survived somewhat precariously through to the 1970s when it was phased out in favour of a postal auction, but was reactivated after only a brief respite in the form of booklets made available at Society meetings. These booklets are currently being circulated to members in packets of 15 booklets, which are passed on by hand thus with no postage costs incurred. The wider interest in various forms of stamp auctions in recent years has lead to similar activities within the Society, although programmed auction nights have a long history, often as fund-raising events. They occurred with no great regularity until 1974 when it was proposed that the AGM be followed by an auction. This has become standard practice, ensuring good attendances at AGMs and also ensuring that the business is conducted expeditiously! The postal auction begun in 1977 with a modest offering of fifty-five lots and has flourished, in part because it is directed to a wider collector base than the Society can offer. Recent auctions have had in the region of 1200 lots. Return

Social Events
It was fifteen years after the formation of the Society before the serious pursuit of philately was relaxed to allow a social occasion to be included in the syllabus. In 1935, the Society's Silver Jubilee was celebrated in a local hotel with whist, followed by dinner and dancing and as the Society had attained their silver jubilee in the same year in which that eminent collector, King George V celebrated his, a telegram of loyal greetings was duly despatched. The Society's archive still holds the response in the form of a telegram from Sandringham, which was read out at the dinner, thanking the members "for their kind and loyal greetings". The Society's centennial was celebrated to the day by a civic reception at the kind invitation of the Lord Provost of Aberdeen, and the Centenary Year celebrations were concluded with a dinner attended by many members and guests. Return

Research
The membership of the Society has included many philatelists who engaged in original research and who published their findings in journal articles or monographs. The tone was set by a founder member, P J Anderson, described by Melville as "the biographer of philately". He was the first commoner to sign the Roll of Distinguished Philatelists in 1921, in recognition of his bibliographical work on the history of the hobby. Notable work has been published by members over the years on subjects ranging as widely as Heraldry in Philately, Scots Local Name stamps, Austrian Post Offices Abroad, the Cayman Islands, the Postal markings of the Gambia, Denmark's Fri-Correspondence Kort and the Aberdeen Penny Post Service. The Society's purpose, as set out in the original constitution of 1910, "to promote the study and practice of philately" has been well served by successive generations and it looks forward to further contributions with confidence. Return

Click the headings below to jump to the appropriate section of the history: 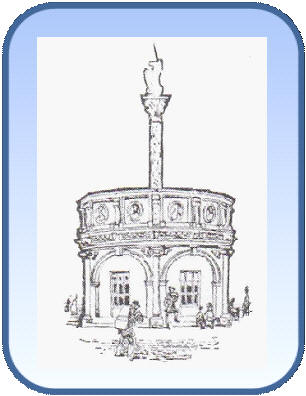 Further details of content are available here in PDF format. If you would like to purchase a copy please see the Offers  page