Aberdeen Philatelic Society: The Society and our Activities

A twice yearly newsletter, which may be accessed via the News page, is produced to keep members up to date with stamp events and news.

There is also an Exchange Packet which consists of booklets containing priced material from a wide selection of countries. These booklets are circulated to members in packets of 15 booklets, which are passed by hand between members. The packet secretary has produced some guidelines for both vendors and buyers - could all involved please read and follow these guidelines

The society was founded in 1910 when it was known as the Aberdeen and North of Scotland Philatelic Society. It was created to promote the collection and study of postage stamps, by a group of people interested in studying the many branches of philately. Further details of our history are available here

2010 was therefore the centenary of founding of the society. As it was a special year for the society a number of events took place to celebrate. These included a celebration at the Town House in Aberdeen on the anniversary of our founding. Next the Society hosted the ASPS Congress at Perth in April. We then held our Centenary Exhibition with a nautical theme, in the Maritime Museum, Aberdeen which ran from July until November. Next was a display to the Royal Philatelic Society in November, and finally a Celebration Dinner was held in Aberdeen in March 2011.

Members of the Society have are wide and varied collecting interests, which include both stamps and postal history. Some members interests are of a general type, whilst others are highly specialised. All are equally welcome. In addition, some of our members have competed successfully at National level.

As part of the Centenary year celebrations a display was given to the Royal Philatelic Society, London and to commemorate this, a commemorative booklet was produced which illustrates some of our members interests. On the right is included by way of illustration a list, far from complete, of some of these specific interests. 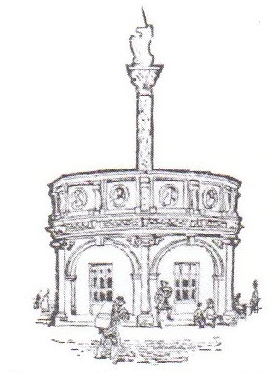 The Aberdeen Mercat Cross, which was used as a Post Office from 1822 to 1825, was adopted as the Society Logo by 1967. The 17th century Cross in the Castlegate, Aberdeen, was used for public proclamations, and is one of the finest in Britain. It is topped by a fine unicorn supporting a Saltire shield. More information on the Mercat Cross is here

The Presidential Insignia was presented to the President by David Kindley at our meeting of 22nd September 2011. The insignia includes a representation of our logo, the Aberdeen Mercat Cross, and a bar, from which the Stampex Wyon medal is suspended. David Kindley generously donated the Wyon Medal on which the insignia is based, and also arranged for its transformation into the Insignia.